From Edge of Eternity Wiki
Jump to: navigation, search 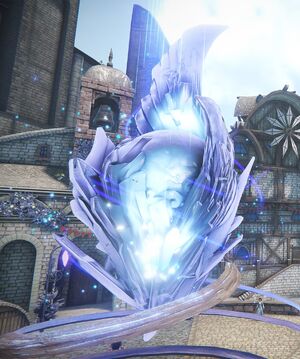 Crystal are one of the main mechanic in the game. They can be equipped on weapons to increase the character’s stats, and more importantly to give them access to various spells.

Equipped crystals will show in a red border in the inventory with a [E] equipped icon.

Crystals can also be found in the environment where they will affect the nexus they are on in battle.

Crystals can be found in 6 colours, both in the form of equipable items, and in the environment.

Not all crystals have spells in them. Stats can change from crystal to crystal.

Quality can be either shining shard or gemstone smooth. Yellow crystals can contain the spells Lighting strike I or Defense breaker for Daryon, and Thunderift I for Selene.

Quality can be either shining shard or gemstone smooth. Red crystals can contain the spells Acceleration or Fire strike I for Daryon, and Earthgrave I or Firerift I for Selene.

In the environment, red crystals will enhance the attributes of targets on the same nexus.

Quality can be either shining shard or gemstone smooth. Green crystals can contain the spell Spring I for Selene.

In the environment, green crystals will heal the targets on the same nexus.

Quality can be either shining shard or gemstone smooth. Blue crystals can contain the spells icicle strike I for Daryon, and Icerift I for Selene.

In the environment, blue crystals will give a boost in defense to the targets on the same nexus.

Quality can be either shining shard or gemstone smooth. Cyan crystals can contain the spells Time loop or Icicle strike I for Daryon, and Icerift I for Selene.

Quality can be either shining shard or gemstone smooth. Magenta crystals can contain the spells Time loop or Defense breaker for Daryon, and Earthgrave I for Selene.

In the environment, magenta crystals will send damage to the target on the same nexus.

Crystals can be crafted together to get better crystals or crystals of a different colour. 5 crystals will be consumed to create the new one.

Crystals can be found in chests all over the map, or rewarded after a successful fight. Crystals also can be bought from merchants in Herelsor, or from caravans after they have been saved in event. 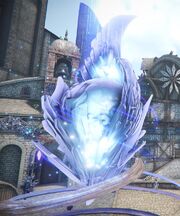 The crystal from Herelsor's Plaza

In Heryon, crystals are sacred, and revered as houses of the gods and receptacle of their power. Crystals are the source of magic, and can be used to perform spells and miracles.They can be found everywhere on the continent, from forests to plains, swamps, or cities. In daily life, each household possess a crystal that can be used to vote, sign petition, and participate in politics.

Crystals used to be a commodity reserved to an elite. Back then, there was no way to cut and extract crystals. As a result, most crystals were impossible to move. Sometimes, people were lucky to find a crystal small enough to be transportable, and fetch them for a high price to the rich.

One of the most impressive feat realised with crystals dated back to 1500 years. At the time, a gigantic meteor was menacing Heryon, threatening to crash and destroy the continent in one cataclysmic strike. In an ultimate resort, people began to pray to the Gods, begging them to save the population from such a terrible fate. So many put their heart and soul in those prayers that the crystals performed a miracle, and the meteor was deviated, crashing in a deserted area.

Among the debris of the meteor, a metal was found that was strong enough to break and cut the crystals. This was the beginning of a golden age of harvest. Mining began, and crystals were now more affordable to the point that everyone could get one.

But the easy access to crystals launched a civil war in the continent, factions fighting for the crystals, notably the county of Astyria, famous for its artisans and jewelers. In the end, the Consort took charge of crystal management, a feat the organisation still perform today.